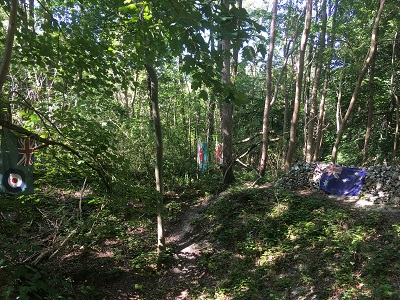 "Early in the morning of 18 July, 1944, a Halifax bomber, LK-Q of 578 Squadron RAF, was on its way from Burn in Yorkshire to Caen in Normandy to join operation Goodwood, aimed at helping Montgomery’s troops to break the German lines.Sadly, the plane developed an engine fire on route and its flight ended with a crash and massive explosion in Carpenters Wood near Burchett’s Green.Of the crew of seven, only the rear gunner escaped by parachute and the rest perished in the crash. Their bodies were never found.Craters from the impact can still be seen in the wood and the site is now marked by a small memorial cared for by the Maidenhead Air Training Corps."

One summer morning early, flying out from BurnLK-Q set out for Caen, never to returnAnd perhaps you told some pretty girl,        you’d meet her for the danceBut first you had a job to do, somewhere over FranceWhere every flight’s a gamble, the fighters and the flakAnd every airman knows the risk, that some will not come back

From Yorkshire out to Normandy, two hours at the mostSet a course for Reading, then turn towards the coastAlong the spine of England, in sight of Oxford’s spiresThen out upon the starboard wing an engine catches fireSo now it’s steer for open country, away from homes and townsWith the bomb bays fully laden,        find somewhere to put her down

Who’d be a tail-end Charlie?, stuck out all aloneYour thoughts begin to wander,        when you’re too much on your ownBut falling from his turret, as she made her final diveHugh Sloan was the only man to reach the ground aliveSix men among the many, who fought and flew and fellFound a lonely woodland grave - so mark their memory well